Kashla was just 29 years old when she faced kidney failure for the second time. Her transplanted kidney had lasted 17 years, but now-;on dialysis, tired, unable to work full time, dealing with infections, hospitalizations and blood transfusions, Kashla learns about the Live Donor Kidney Transplant Program at Texas Transplant Institute from the staff at the dialysis clinic.

Her parents, Leonard and Judy, and older brother, Torrance, were willing but unsuitable donors because of their high blood pressure. Torrance had a friend at their church, Suzette, who volunteered to donate her kidney but she wasn't a match.

To make matters worse, during the initial evaluation, Dr. Adam Bingaman, Director of the Live Donor Kidney Transplant Program, tells Kashla and her mother, Judy, that Kashla was highly sensitized-;100%-- from her previous transplant and blood transfusions. "My face just fell. He asked me why I was looking at him like that. I thought it meant another transplant was impossible, but Dr. Bingaman reassured us it wasn't necessarily so," says Judy.

"The facts are the facts: her PRA, or Panel Reactive Antibody-;a blood test which measures anti-human antibodies-;was 100%. Statistically, according to the computer model, it means she would not be a match for 100% of the population. Computers are almost always right, but there's still a chance. And we've already transplanted kidney patients with a PRA of 100%," says Dr. Bingaman.

So while it might not be impossible to find a match for Kashla's kidney, it wouldn't be imminent either.

She and her family waited on pins and needles for a few years while Dr. Bingaman and his team monitored their large and growing database of incompatible kidney donor and recipient pairs to find a match for her. With a match in the database, Kashla could get a kidney and Suzette could donate hers to another recipient whose donor was incompatible.

Not long before Christmas in 2010, Kashla's family was excitedly planning a family cruise to celebrate her aunt's 60th birthday in February when Oscar Nava called. Oscar, the Live Donor Supervisor, asked Kashla if she would be available for a kidney transplant in early January. They had found a match!

"It was a great moment," says Dr. Bingaman. "When we see a potential donor whose genes might offer a favorable match, we get excited. People like Kashla who have so many antibodies have an extremely small number of chances for a match. This was a rare opportunity that may not ever come around again," he says.

There was a catch. Not only had Kashla and Suzette not been evaluated for several years, but also their transplant would be part of a donor chain where a non-directed donor offers a kidney and starts a cascade of transplants among incompatible pairs. All seven donor and recipient pairs would need to be available and healthy for any of the transplants to take place.

"We constantly stayed in prayer that nobody would back out," says Kashla, who knew there was a possibility that the transplant might not take place as planned.

But it did. Kashla's family, her pastor, his wife, her mother, the assistant pastor's wife, Suzette's husband and a number of other members of their church family stayed at the hospital all day and night to pray and support Kashla and Suzette. "There was a line around the corner in the ICU with people who came to visit!" Kashla laughs. 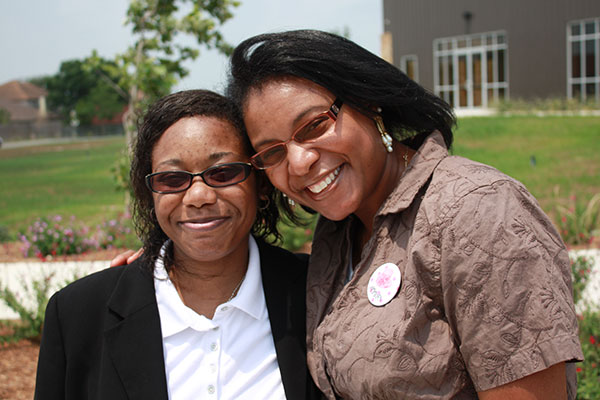 Today, four months later, Kashla is doing great. "And I haven't taken a single nap since my transplant!" she says. Kashla went back to part-time work a little over two months after her transplant, is exercising regularly and planning a new career in payroll accounting. Both she and her mother are grateful to Dr. Bingaman –"We are so in love with Dr. Bingaman!" says Judy-;and to her father and brother-;"Without them, I don't know how we could have managed this," she says.

"It was truly evident that God was in control," adds Leonard.